This week we are going to tackle all of Portugal. Home of Port, one of the most famous wines in the world. It is also home to Madeira wine. In addition to these to famous wines, Portugal also has some excellent non-fortified wines. We will cover those wines and Port and Madeira today.

First let’s talk about Portuguese wine in general. Like many European countries, wine has been made here for centuries; millennia even. It’s also been allowed to develop on its own due to its relative geographical isolation with the Atlantic to the west and south and mostly mountains to the north and east. However that didn’t prevent phlloxera from also affecting the country.

The climate in Portugal is heavily influenced by the Atlantic and Mediterranean obviously. It also can have a continental climate farther inland. Soils in the north have granite, slate, schist while soils in the south have limestone, clay. Sandy soils can be not only found in the coastal regions, but also the south.

Portugal is also the home of the first demarcated wine region. In the 1700s Port wine was growing in popularity; especially in Britain. To protect their wine, the area in the Douro where Port is made was officially named a wine region in 1756.

Portugal is also the main supplier of cork. Cork comes from trees. After the phylloxera epidemic in the 1700s, much of the the vines in the south were decimated. The growers there couldn’t continue with growing grapes and switched to the cork oak tree. Portugal supplies about 50% of the entire world’s cork.

We have a lot to cover here and may not be able to contain it into one week. First let’s list the main regions:

We also need to cover Portugal’s wine classification from lowest to highest:

There are 25 total DOCs in Portugal. I will list the most important for our discussion below: 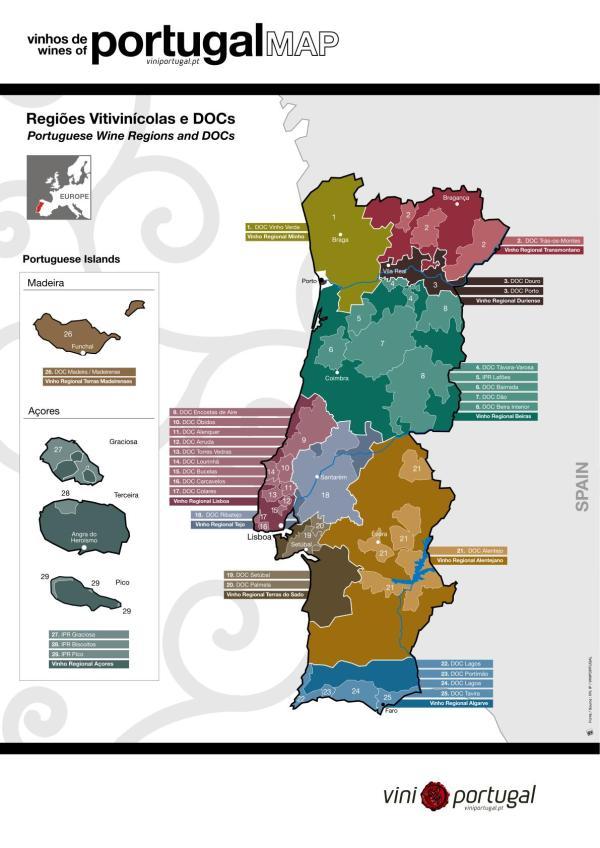 Let’s cover the major non-fortified wines first starting with Vinho Verde. The name translates to “green wine.” However, it doesn’t refer to the color of the wine. Rather it refers to the youth of the wine. While there can be a greenish hue to it sometimes, this is a young wine and meant to be consumed early. This DOC is in the northwestern part of the country. Almost all wine from here that we encounter is white, but red is made. The two main white varietals use are Alvarinho (Albariño) and Loureiro. Alcohol levels tend to be low with this style of wine, though you may find some as high as 12.5%. For red, you will most likely encounter Vinhão. Vinho Verdes tend to be dry and may have a slight fizz to them.

The Dão and Bairrada are in the central part of the north. The main thing to take away about Bairrada is its indigenous varietals – Baga (red) and Bical (white). Baga has been compared to Nebbiolo for its high acid and tannin content. Therefore it makes heavy wines that need lots of aging. Bical is very acidic and is used for both still and sparkling wine.

The Dão has been gaining momentum over the years. Traditionally the reds have been overpowering but more recently the quality has improved. Both reds (80%) and whites (20%) are produced here. The main varietals to know are:

Alentejo is in the southern part of the country. This region has seen a few changes in designations. There are eight subregions here that all had either an IPR or DOC designation prior to 2003. In 2003 they were all lumped together into the Alentejo DOC, however any of the regions may add their name to the DOC. One of those to make note of is Borba. It’s claim to fame right now is the investment of the Lafite Rothchilds in one of the wineries here, Quinta do Carmo.

Douro. This is the region that makes both fortified and non-fortified wine. You may have heard of the fortified wine. It’s called Port. Before we delve into what Port is, let’s talk about the non-fortified wines first. Douro is in eastern part of the Douro valley. It borders Spain. It gets hot here in the summer. Texas hot. 100 degrees hot. The soil is mainly schist. Granite is the other main soil type and much of the non-fortified wine grapes are grown in this soild. Schist is mostly reserved for the grapes used for Port.

The wines from here have been gaining in popularity recently. The winemakers here have been improving the quality of the wines. Red is the dominant wine here since they use the same varietals as Port. The styles can be anything from Bordeaux clarets to full-bodied Burgundies. There are some white wines made here.

OK, so let’s talk about Port. It gets its name from the city Oporto. It’s a wine fortified with brandy. The brandy is added during the fermentation process to stop it. This is done when the wine is at about 6-8% alcohol. The result is a sweet wine due to the unfermented sugars. Before we get too far into Port, I’ll briefly give you a history.

Back in the late 1600s, two Englishmen were sent to a wine merchant north of Oporto to learn the wine business. While there, they made a trip up the Douro River and ended up staying with the Abbot of Lamego. His wine was superb and they got him to reveal his secret – the aforementioned addition of brandy. The men loved the wine so much they bought his entire stock and had it shipped back to England.

However, before these men and found this wine, the British had already been in the area building a wine trade. in 1703 a very favorable treaty between England and Portugal was signed that gave Portuguese wines favorable tariffs. Eventually other countries tried to come in to capitalize on the popularity of Port. The British, though, still remained the dominant player.

That is until 1755 when the Marquis of Pombal got involved. He put heavy restrictions on the export of Port for all involved. The Brits were clearly upset but the Marquis prevailed. He even created the Oporto Wine Company and gave it wide-reaching powers.

Even though the Marquis instigated many regulations that were unpopular, these same regulations improved the Port. From this period and the British being snubbed, two major styles of Port emerged. The Brits (and much of Northern Europe) prefer the vintage Ports which are bigger and sweeter, whereas the Portuguese prefer the Tawny style which is lighter more mellow style.

Back to the production of Port. The brandy that is used to stop the fermentation is called aguardente. It is a clear, flavorless, grape-distilled spirit. So it’s not your typical brandy. It is also 77% alcohol. Not 77 proof, 77% alcohol. That’s 154 proof for those of you playing the home game. This aguardente is normally made from grapes from Southern Portugal or from excees grapes from Douro. Differing amounts of aguardente are added depending on the desired outcome.

All maturation and blending up until 1986 had to be done in the town of Vila Nova de Gaia which is on the left bank of the Douro estuary. After 1986, that restriction was lifted. However, only wine from the Douro region can still be called Port. Also, The word Port is not protected outside of the European Union. So it is possible to get a “port” from another non-European country. To help with that you may see the work Porto or Oporto instead. If a bottle has either of those two words, then it is a Port from Douro.

What are the styles of Port? As I mentioned before there are two main styles. These are indicated by how the wine is aged. For the big, bold, vintage style, the wine is bottle aged. For tawny, it is barrel aged. Let’s cover these two in a little more detail.

OK, so what grapes are used? We haven’t covered that part yet. As of 2005 there are officially 48 varietals that can be used. Up until then over 100 were allowed. I won’t cover all of the varietals but I will list six most widely used:

On to Maderia. Our last stop today. Made on the island of the same name in the Atlantic about 620 miles west southwest of Europe. Another fortified wine with a twist. Once these wines have had their fermentation stopped, they are then “cooked” by various methods to produce its distinctive character.

There are four major types of Madeira based on the names of the varietal used and each with a certain level of sweetness and characteristics:

Next the “cooking” process is done. This replicates what was accidentally discovered by the producers when a shipment was returned. During the long sea voyages, the wine experienced extreme temperatures and oxidation that changed the wine. To replicate this, the wine producers use a process called estufagem.There are 3 different ways estufagem are done. The cheapest way is to store the wine in concrete or stainless steel tanks that have hot water circulating around them to produce high temperatures of 130 °F for at least 90 days. This is known as Cuba de Calor. The second method (Armazem de Calor) uses a large wooden cask in a specially designed room similar to a sauna. The wine is aged here from six months to one year. The third method and most expensive (Canteiro) has the wine aged in warm rooms heated by the sun. For a vintage Madeira this can last 20-100 years.

That’s going to wrap it up for this week. We will be Coming to America next time. We will cover basic American winemaking and laws, and then the “Big 4” states.

Thanks for watching/reading this week’s lesson! I will see all of you next week!