Lesson 26 – The Rest of California

As I look over the information for the rest of California, I have decided to push through and cover the rest of the state this week. Well will cover the Central Coast, South Coast, and Central Valley (including the Sierra Foothills). I will cover at least both Washington and Oregon next week, and possibly include New York. We have a “long way to go and a short time to get there.” Below is the same overall map from last week for reference: 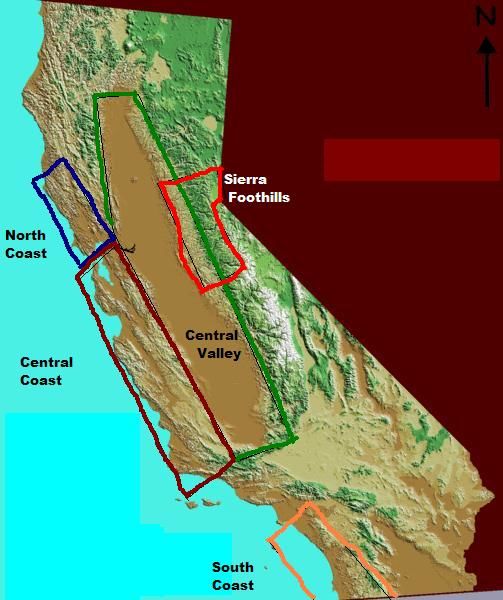 Being along the coast, the climate here is more temperate. Winters are mild and summers are cooler than normal. While mild winters are nice for you and I, crops actually need some dormancy between growing seasons to “recharge.” So grapes here may have the occasional issue of not resetting their clock. Cooler weather and shorter days mean the plants hibernate during the winter.  However, again, this is a large area and generalities of climate don’t always apply. What happens in the North doesn’t necessarily happen in the South. And remember the farther inland you go the less influence the Pacific has.

Wine has been made here since the 1830s. Once the mid to late 20th century happened, expansion into this area was driven by urban expansion itself. In the southern part vineyards were almost non-existant until the 1970s. Pinot Noir ended up being planted here to boost the sparkling wine market, but people started to realize that the ares could produce good still Pinot Noir.

While this is a very large area cover, we will really only highlight the following AVAs:

Santa Barbara County, like most of California, has been making wine for over 200 years. Officially it started in 1782 when Father Junipero Serra planted cuttings from Mexico in what is now the Milpas area of Santa Barbara. It wasn’t until 1884 that French cuttings made it to Santa Cruz Island.

For most of the years that followed, wine wasn’t as big as it is now. The past 25 years have seen large growth in wineries in the area. This is mainly due to the U.C. Davis researchers realizing that Santa Barbara County was a cooler climate than much of Northern California (remember the degree days from last time?). Over the years the Santa Barbara County AVAs have become known for the usual suspects; Chardonnay, Pinot Noir, Syrah, Sauvignon Blanc, Cabernet Sauvignon, and Riesling.

Below are the AVAs again with some notes about each:

Paso Robles is the hot area from the Central Coast. It’s been making a splash for quite a while now. Grapes were first planted here in 1797. It wasn’t until 100 years later that commercial operations really stared however.

Throughout the 20th Century, many different varietals were planted. In the middle part, Zinfandel was the main varietal. It was later replaced in favor of the traditional Bordeaux varietals, especially Cabernet Sauvignon. Then in the 1980s, a shift to the Rhône varietals Syrah, Viognier, and Roussanne. No matter what, all these varietals are still grown. Cabernet Sauvignon is still the most planted in the area.

With over 665,000 acres, it is also THE largest AVA in the state. This means that it also has a wide variety of climates and soils. Because of this, there is currently a proposal to the TTB to divide it into multiple sub-appellations. So be on the look out for this to possibly happen in the future.

A small AVA that is only 35 square miles. It is near the coast just south of San Luis Obispo and north of Arroyo Grande. As such it has a cool climate. It also has one of the longest growing seasons in the state. Chardonnay, Pinot Noir, and Syrah are the main varietals here.

Ok, so let’s move on to the rest of California. The South Coast encompasses the southern part of the state including Los Angeles and San Diego. Specifically it includes:

This place is pretty big. It runs along both the Central Coast and North Coast AVAs. It’s also the major bulk wine producer for the state. 75% of the State’s wine comes from here and 50% of that is from Gallo alone. Besides grapes, plenty of other fruits and other products such as rice and cattle are grown here. It’s a very fertile place.

Since this area has the reputation of being the bulk wine supplier of the state, it can be expected that the quality of the wines from here won’t stand up to the likes of the the North Coast AVAs. Of all the AVAs in the Central Valley, Lodi is probably the most well known and produces the best. Here is the list of notable AVAs in the Central Valley:

OK, so that’s going to wrap it up for this week. Like I said above, I will try to compress the rest of the U.S. into the next lesson. As far as what we need to know for the test, there really isn’t a whole lot after California. I finalized my plans for the Certified Specialist of Wine test in Austin next month. I’ll be finalizing my plans for the Introductory exam in Irving soon. At least the Master Sommelier website corrected from Irvine to Irving. They must be paying attention to this site 😉

Thanks for watching/reading this week’s lesson! I will see all of you next time!