This week we will cover the rest of the “Big 4”; Oregon, Washington, and New York. These 3 states combined still don’t approach the output of California, but they are significant when talking about United States wine. Does that mean the “Other 46” don’t contribute? Not at all, however, these other 3 states are producing more wine that is normally on par with California in the eyes of the world.

Let’s start with Oregon. This state seems to be made for Pinot Noir and, to a lesser extent, Pinot Gris (Pinot Grigio). Oregon has been producing wine since the first vinifera grapes were planted in 1854. However, it was known for wines from lambrusca grapes (native North American grapes) for much of its history. It wasn’t until the 1970s that Oregon started becoming known for wines made from the “classic” varietals.

Pinot Noir has found a home in this wet state. Before we get to far, let’s talk about the climate. It rains here. A lot. Normally that’s a bad thing for grapes. Especially if it happens late into the summer during harvest. Luckily most of the rainfall happens during the fall and winter months. This really applies to the western half of the state. The eastern half is much drier and hotter. This is due to the Cascade Mountains that divide the state.

There are several main wine growing areas in the state. I’ve listed them below: 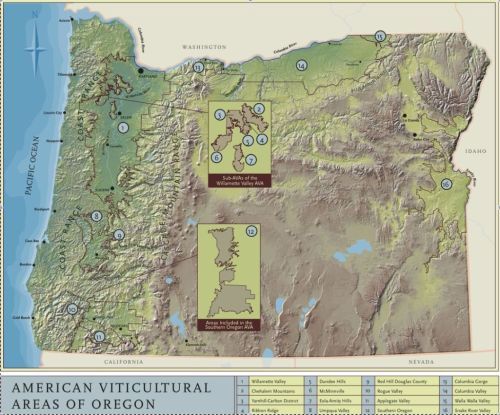 Of these, the most well-known is the Willamette Valley. Three of these are AVAs that straddle more than one state. Columbia Gorge, Walla Walla, and Snake River all have Oregon and another state as part of them. The first two are also in Washington. Snake River is also in Idaho. The Walla Walla AVA is also within the Columbia Gorge AVA.

For our purposes, we will just briefly cover the Willamette Valley. This valley stretches from the Columbia River (north of Portland) in the north to just south of Eugene. It is between the Oregon Coast Range and Cascades. As a result it has a fairly mild climate year round.

As I mentioned before, it rains a lot here. Most of the rainfall happens from November to February. The summers are drier. The temperatures are also mild year-round. Rarely does it get about 90 degrees F in the summer and below 32 degrees F in the winter.

Pinot Noir is the top grape here. Pinot Gris is a distant second. Pinot Noir is so dominant that the International Pinot Noir Celebration was created in the late 1980s to help further the State’s reputation for Pinot Noir. This gathering takes place at Linfield College in the town of McMinnville.

The Willamette Valley also has 6 sub-appellations. For the sake of knowing them I’ve listed them below:

Washington State is similar to Oregon in that the western part of the state is wet and mildwhile the eastern part is dry and hot. However, where most of the wine comes from the west in Oregon, in Washington it comes from the hot and dry west. In addition to that, many of the actual wineries are in the west. Their vineyards are sometimes hundreds of miles away. While it isn’t unusual in the wine world for a winery to get grapes from places far away, those grapes are usually bought from an independent grower rather than from a vineyard owned by the winery. This doesn’t mean that the wineries don’t buy from independent growers, just that it’s not unusual for a winery to own vineyards in the eastern part of the state. Chateau Ste Michelle is a perfect example of this. Their winery is 15 miles northeast of Seattle while their vineyards are in the east.

This state is also 2nd in the country in terms of wine production. And like first-place California, is home to many varietals. Initially, Washington was known for it’s white wines. Recently, the trend is more red. Red varietals now account for 60%. Even so, Chardonnay and Riesling each are 21% of the grapes planted. Cabernet Sauvignon is 18% and Merlot is 16%.

Below is a list of the AVAs in the state along with their sub-appellations:

99% of the wine from Washington comes from the first four main areas. Only 1% comes from Puget Sound.

New York is third in production in wine. Wine has been made here since the Dutch settlers in the 17th century. However it wasn’t until the 1950s that New York wine actually made any impact. Until then many failed attempts at making quality wine occurred. It wasn’t until a Ukrainian immigrant named Dr. Konstantin Frank eventually teamed up with a Champagne maker named Charles Fournier and began planting grapes that made sense for New York’s climate and terroir.

It’s no secret that the winters here are pretty rough. Freezing temperatures and heavy snow are common throughout the state. For this reason, the vast majority of wine has been made from American and French hybrids. However, Fournier and Dr. Frank have proven that some vinifera grapes can be successfully grown here. Even so, only 10% of the wine grapes grown in the state are vinifera. The most common grapes grown are Catawba, Niagra, Aurora, and Elvira.

There are 4 main wine-growing regions in the state:

Of these, the Finger Lakes AVA is the most significant. Despite the harsh winters or the entire region, the “finger lakes” help to temper the climate. This area has been likened to the Rhine area of Germany. Riesling, Chardonnay, Pinot Noir, Gewürztraminer, and Cabernet Sauvignon are among the vinifera grapes grown here with much success. Also French hybrids Vignoles and Seyval Blanc do well.

That will do it for this lesson. For those that have a greater interest in these areas, I plan to go more in depth in the next version of Sommelier School. However, when I get to this subject is unknown. The more advanced information will very likely take a few years to complete.

I took the Certified Specialist of Wine test recently. It’s not that difficult of a test and I believe I passed. Though I know that I messed up a few questions that I really did know the answer. For the Introductory Sommelier Exam, I feel that I will be successful having taken the CSW Exam. You will see some changes to the site as I prep for the Sommelier Exam. Online quizzes taken from content from this site along with other quizzes taken from my study material and online research.

Next on the list is Australia and New Zealand. From a cursory glance of the information, it will take 2 weeks to cover what we need to know. After that South America, South Africa, and Central Europe. I won’t get everything required for the Sommelier Exam by August which is when I am taking it. Other areas we need to cover are Beer, Spirits, Service, and Cigars. Granted the cigars part of all of this will be very general and will most likely be included with service. Taking the exam will also help in crafting the rest of the lessons.

Thanks for watching/reading this lesson! I will see all of you next time!